On the morning of December 28, 2021, BECAMEX TOKYU Co., Ltd. hosted the Groundbreaking Ceremony for the first shopping center in Binh Duong New City “SORA gardens SC”. Also in this morning, with the attendance of distinguished visitors, the Completion Ceremony for the condominium project SORA gardens II which was completed in May of 2021 was also held.

The groundbreaking ceremony of SORA gardens SC welcomed the attendance of special guests including the chairman of Binh Duong Province People’s Committee – Mr. Vo Van Minh, the Consulate General of Japan in Ho Chi Minh City Mr. Nobuhiro Watanabe, chairman from Japanese Chamber of Commerce and Industry in HCMC, Mr. Kohzo Mizushima, representatives from the Binh Duong Government offices, as well as other guests from financial institution, tenants, business partners’ representatives. The guests and visitors all sent big wishes and promised future supports for the success of the project and the sustainable growth of the Binh Duong New City. 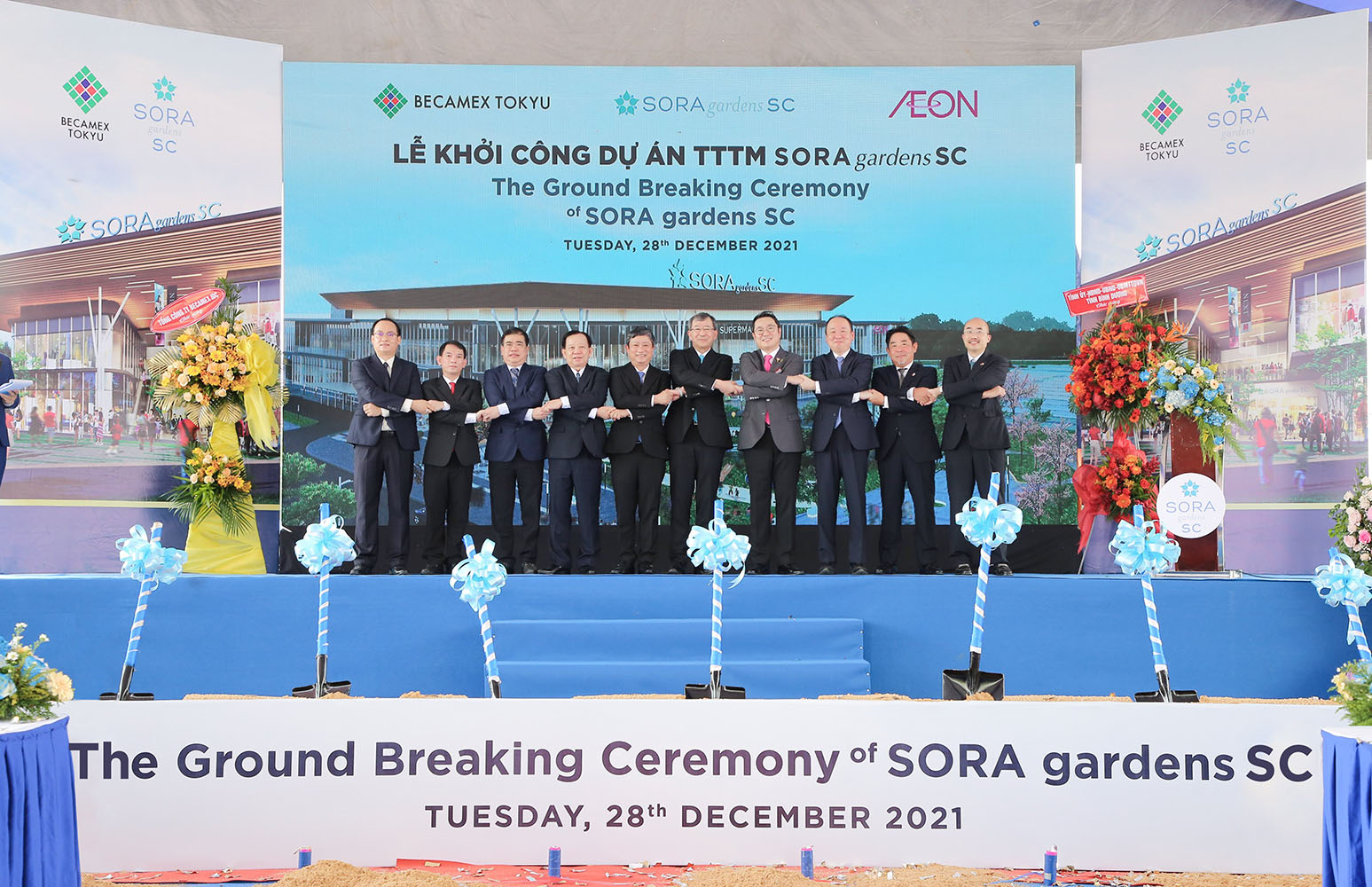 In his opening speech at the ceremony, Mr, Oh Dongkun, General Director of BECAMEX TOKYU Co., Ltd. stated that the company’s being able to open not only residential building, but also full scale commercial facilities in Binh Duong New City would take our development to the next step, and contribute to the further development of this city.

The Consulate General of Japan Mr. Nobuhiro Watanabe shared that, “TOKYU and Becamex IDC has put many efforts in forming a role model in terms of urban development, as it’s not just about building the infrastructure, but also thoroughly boosting the development in other fields such as culture, art, education, entertainment, and community connection”.

Mr. Watanabe believed that the shopping center project of SORA gardens SC’s being completed in 2023 would not only be an oppotunity for Binh Duong New City but also carry a new message – to be a highlight for the 50th anniversary of Vietnam-Japan diplomatic relations in 2023.

Mr. Vo Van Minh, the chairman of Binh Duong Province People’s Committee, also sent his congratulations to BECAMEX TOKYU Co., Ltd. for the achievements the company had gained during the year. The chairman also recognized and appreciated the positive contributions of the company to the economy and social development of Binh Duong Province.  He trusted that along with the condominium projects of SORA gardens I and SORA gardens II, the SORA gardens SC shopping center would form a dynamic and modern community for the residents at the at the New City gateway area, as well as change the look and enhance the value of Binh Duong New City.

On behalf of Binh Duong Government, Mr, Vo Van Minh claimed to always cooperate and support the company, at the same time expected BECAMEX TOKYU to boost the development of the planned projects, take the chance and broaden the collaboration in wider fields, strengthen the potentials and advantages to contribute to the economy-social development of the province. 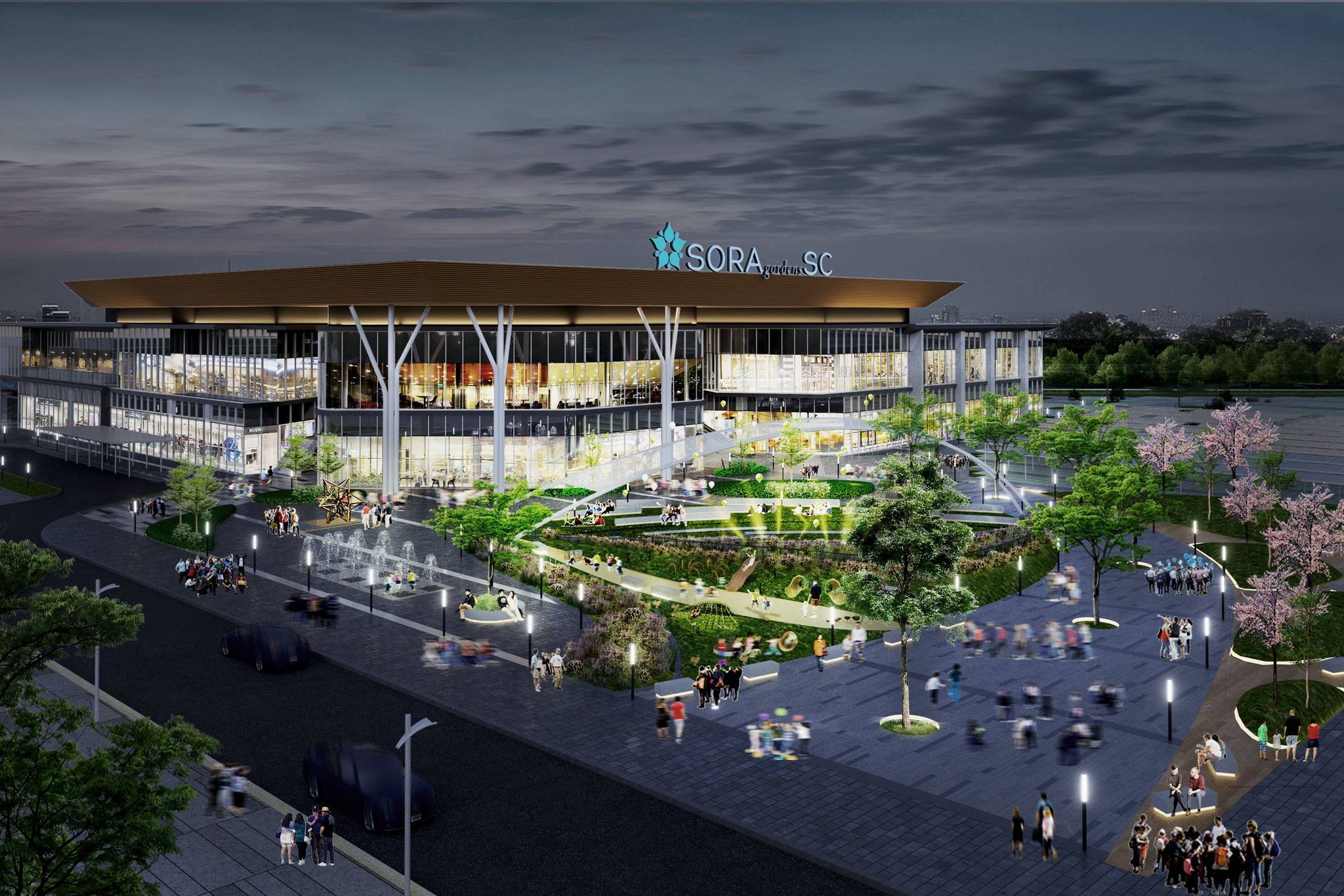 From AEON Vietnam’s point of view, Mr. Furusawa Yasuyuki, General Director of AEON Vietnam Co., Ltd. expressed his hope that through the opening of the new supermarket in Binh Duong New City, AEON Vietnam can be on the residents’ side and be an indispensable part of the economy-social promotion and local community development.

Also in the morning of December 28, BTMJR Investment Co., Ltd – the joint venture between BECAMEX TOKYU Co., Ltd and MITSUBISHI ESTATE RESIDENCE Co., Ltd. held the Completion Ceremony for the condominium project “SORA gardens II” which was completed in May, 2021, after the long social distancing period due to the COVID pandemic effect. The project has been welcoming its residents to move in, join the community of TOKYU Garden City, and enjoy the new life in Binh Duong New City. 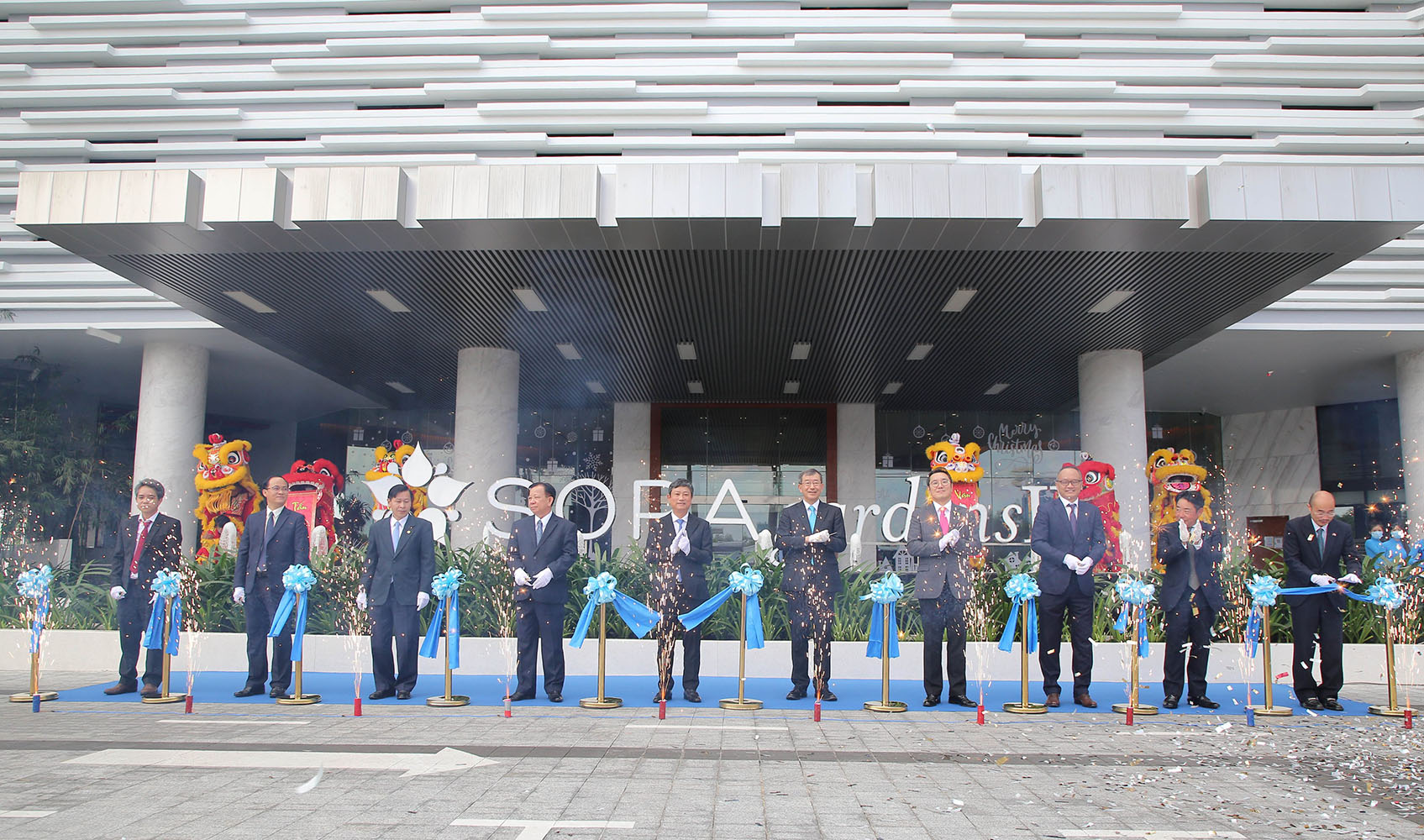 Even though having been affected by the impact of COVID-19, 2021 was a successful year for  BECAMEX TOKYU, as not only be able to complete and commence many residential and commercial projects, the company also won the ”Vietnam Property Awards” operated by the PropertyGuru group. We were awarded as the “Best Township Development” for the urban development project TOKYU Garden City and the “Special Recognition for CSR Corporate Social Responsibility” for its contribution to the community during the period of COVID-19. 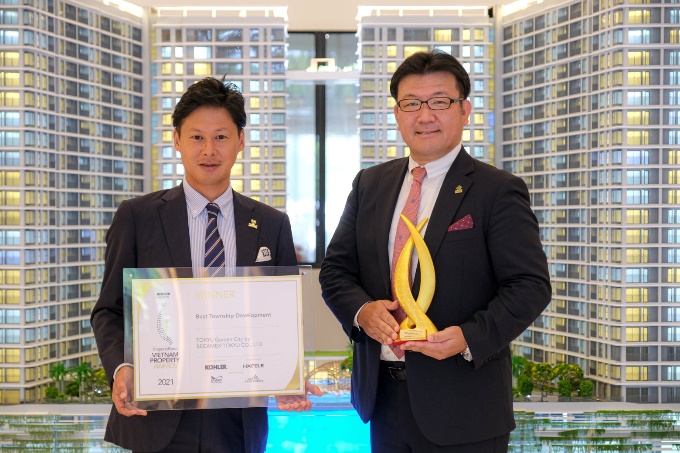 Overcoming the COVID effects and the pandemic situation, next year, BECAMEX TOKYU will welcome its 10th Anniversary in March, 2022. BECAMEX TOKYU will further continue to develop focusing on sustainability issues to increase the additional value for the Binh Duong New City’s future development.

Binh Duong province is well located adjacently north of Ho Chi Minh City which is Vietnam’s largest city, and it has been the 3rd attractive foreign direct investment (FDI) destination only after Ho Chi Minh City and Hanoi with its approximately 4,000 FDI projects, its industrial parks gathering foreign company factories that attracts employees to move and live, hence the population grows to 2,6 million people.

Since August 2012, BECAMEX TOKYU has been developing for over 9 years an urban project “TOKYU Garden City” (total area of 1,000 ha) in Binh Duong New City fusing the local’s culture and customs with their experience from their project “TOKYU Tama Denen Garden City” in Japan. The company is planning to operate more bus routes connecting with Ho Chi Minh City in the future, aiming to increase new immigrants and contribute to the Binh Duong New City development.

Learn more about the projects here.